Smartphones and tablets have revolutionised the way many of us live. When it comes to gaming, the changes are profound.

Check out The Next Level Gaming’s introduction to mobile gaming:

The rise of the smartphone and its tablet cousin has been remarkable. Google’s Our Mobile Planet research suggests that 62% of UK adults own a smartphone today. What’s even more amazing is that this has more than doubled in just two years. Meanwhile, Yahoo has reported that by 2015, the number of people worldwide who own a smartphone is expected to rise to two billion.

But this isn’t just about the numbers. In just a few short years we have gone from seeing our phones as just that – phones – to so much more. Nowadays, we send emails, we browse the web, we listen to music. The term ‘phone’ almost feels redundant. 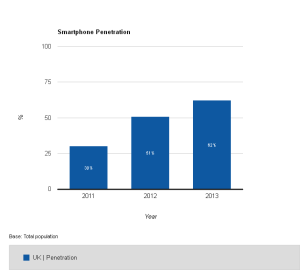 Smartphone penetration in the UK has more than doubled in just two years, according to Google’s Our Mobile Planet

It would probably be fair to say we help manage our entire world through our handheld devices. This is as true for individuals as it is for businesses and organisations, which have quickly learned that they can reach an entirely new audience through their devices in much deeper ways than ever before. In short, mobile devices have become indispensable.

And what is certainly undeniable is the profound change seen by one sector in particular: gaming.

Remember when Snake was the height of the mobile games world? That was 15 years ago, and the mobile gaming world of 1997 is almost unrecognisable to us today. Supercell, developer of mobile gaming behemoths Clash of Clans and Hay Day, made £114.8m in the first quarter of 2013 from these two games alone, for instance. Major games studios like EA tailor their console releases specifically for mobile, with big name titles like FIFA and Dead Space getting the handheld treatment.

So consider this: mobile analytics firm Flurry has reported that tablet owners spend 67% of their time on their devices playing games. Gaming is also the primary function for smartphone users, who stated they spent 39% of their time playing on their devices. That’s massive, and a huge shift away from the idea that gamers simply sit down in front of a TV in their living rooms before shooting zombies or scoring goals. 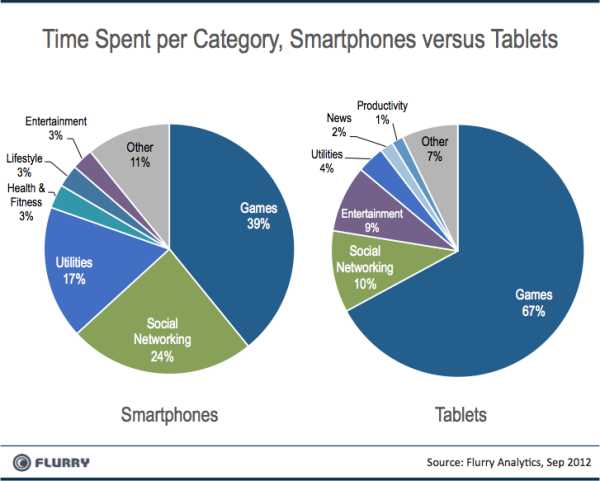 Mobile device owners spend the majority of their time on games, according to research group Flurry

What does this mean for the gaming industry as a whole? Well, it has had to recognise that it can no longer control where or when its products are consumed. Nowadays, people play games on their devices on the way to work or when they have a spare few minutes. Games have and will have to adapt to the stop and start nature of mobile gaming.

A quarter of all commuters aged between 16 and 24 are now playing mobile games on their journey into work. That’s a huge number of people playing mobile games for a relatively short period of time; they don’t have the time for lengthy missions but still want to feel engaged and immersed.

That’s a significant challenge for developers, but it probably goes some way to explaining why titles like Candy Crush Saga and Angry Birds – with their millions of dedicated players – are doing so well. They’re straightforward, they don’t require much time investment, but they’re fun, and are therefore perfect for the millions of people playing mobile games on the go.

Yet while this loss of absolute control may seem like a restriction for developers, there are opportunities as well. The rise of the advanced mobile device has seen a noticeable blurring of the lines between social and gaming. With the press of a button you can share your high score with your friends or invite them to join your team. You can let your friends know exactly what games you enjoy and convince them to play too. This is a massive opportunity for developers: a vast untapped market of potentially engaged customers has been thrown wide open to them thanks to the meshing of gaming and social media.

The good news for consumers is that mobile games will continue to get better and more tailored to our wants as companies learn more about us through what we share. We’re already seeing it in next generation consoles, with the Xbox One’s revamped Kinect being able to learn all about us and what we want from our gaming experience.

But for mobile gaming firms, the opportunities are even greater thanks to the ready made goldmine of information we share on sites like Facebook. No longer are games developers throwing out a product in the hope it is well received; with so much information at hand, they are better placed to meet consumer demands.

‘No gaming utopia just yet’

There is, however, a slight caveat to this. Dr Ross Warner of Cardiff University specialises in modern media and culture, and warns that we’re not at the dawn of a technological utopia just yet. “You have to remain aware of what was once called the ‘digital divide’,” he warns.

“Yes, you do see a lot of people with regards to smartphones and tablets. But there are still, for economic reasons and social reasons, certain social or generational groups that don’t embrace this new form of technology,” he continues, although he is quick to point out that this may well change in the coming decades.

And while this remains the case, it will always remain a limiting factor holding mobile back.

Yet while not everyone yet has a smartphone, the number of us that do is increasing all the time. And one thing is for sure: this has sparked a massive change in the gaming industry, with products becoming more immersive, more engaging and more enjoyable with every passing year.

With any luck, this is a trend that is set to continue.

It’s worth checking out Google’s Our Mobile Planet. It allows you to compare mobile device usage across a host of nations, age categories, dates and more. You can also ask it to show you how people are using their devices, all in straightforward visual form. You can even download the charts or read a more in depth report of the data.

3 thoughts on “How are mobile devices shaping the gaming industry?”